There's no present. There's only the immediate future and the recent past.
George Carlin 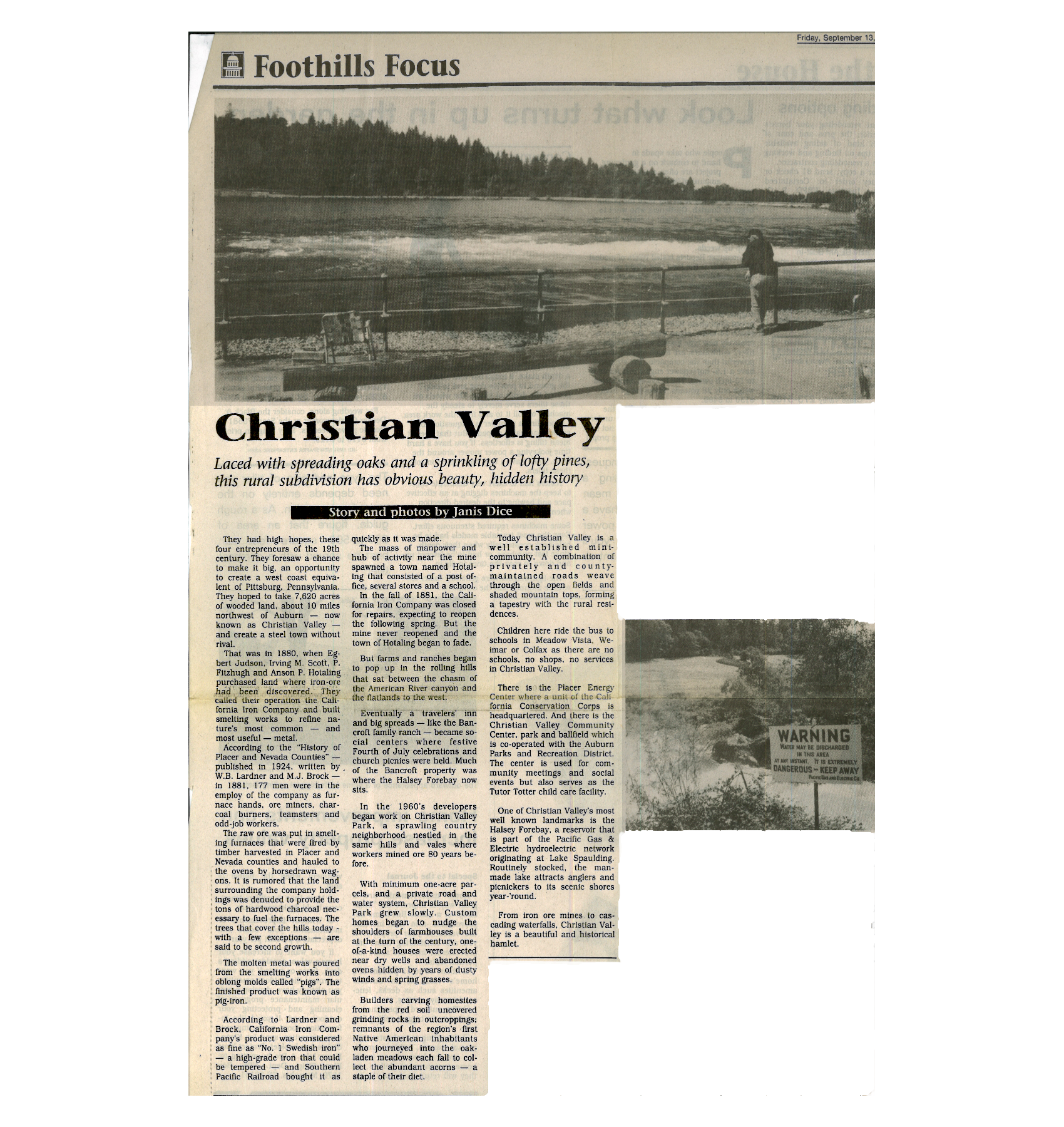 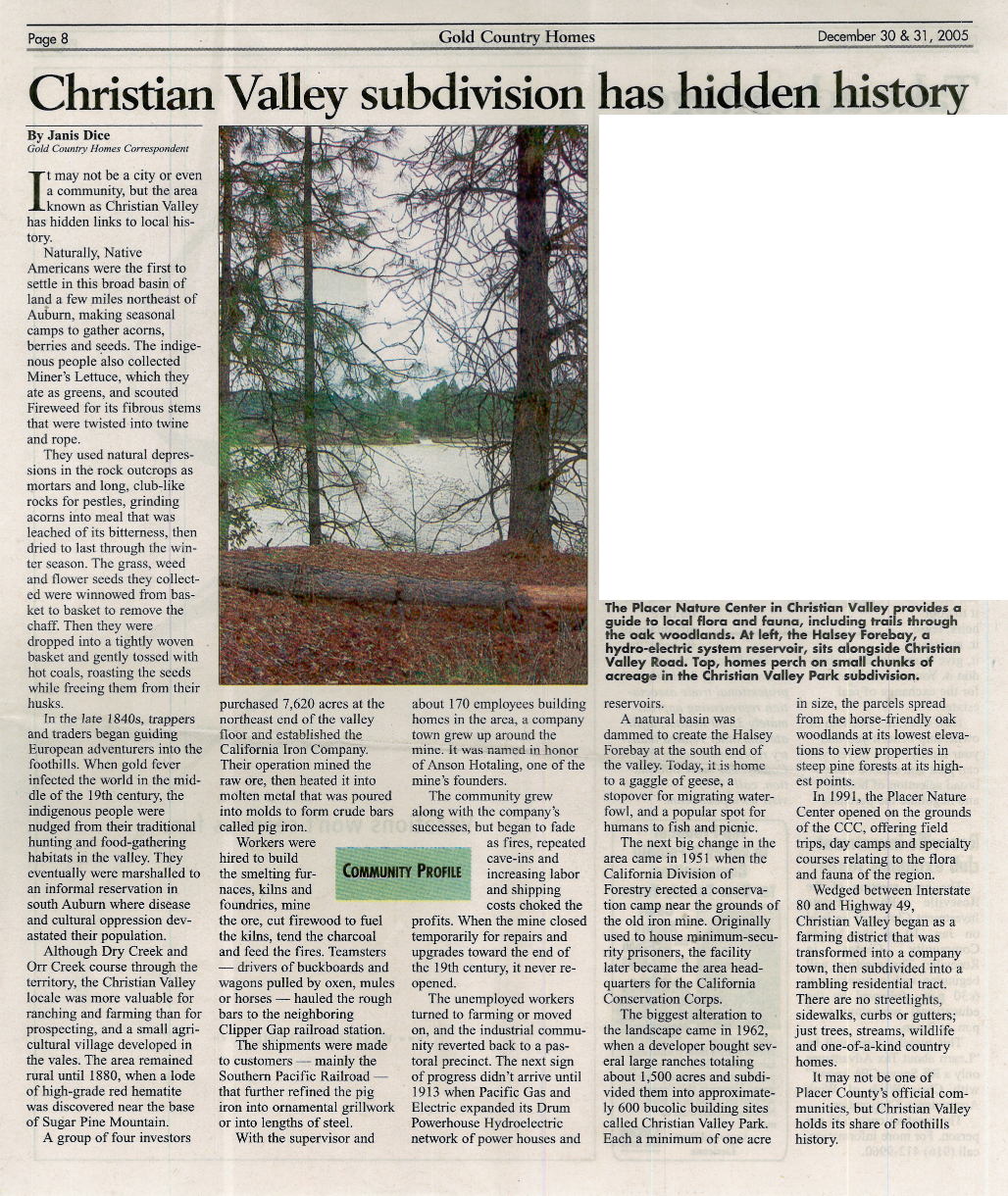 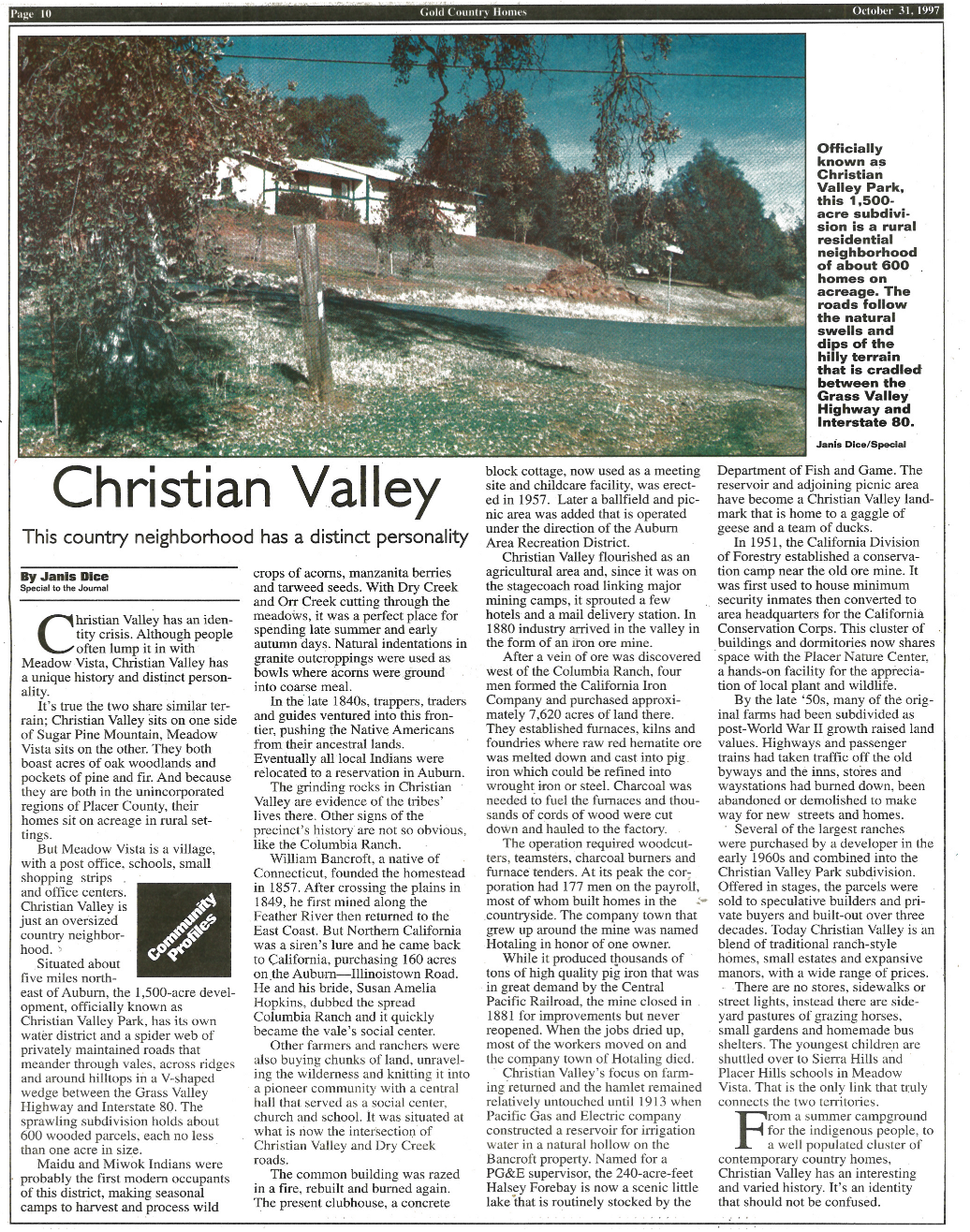 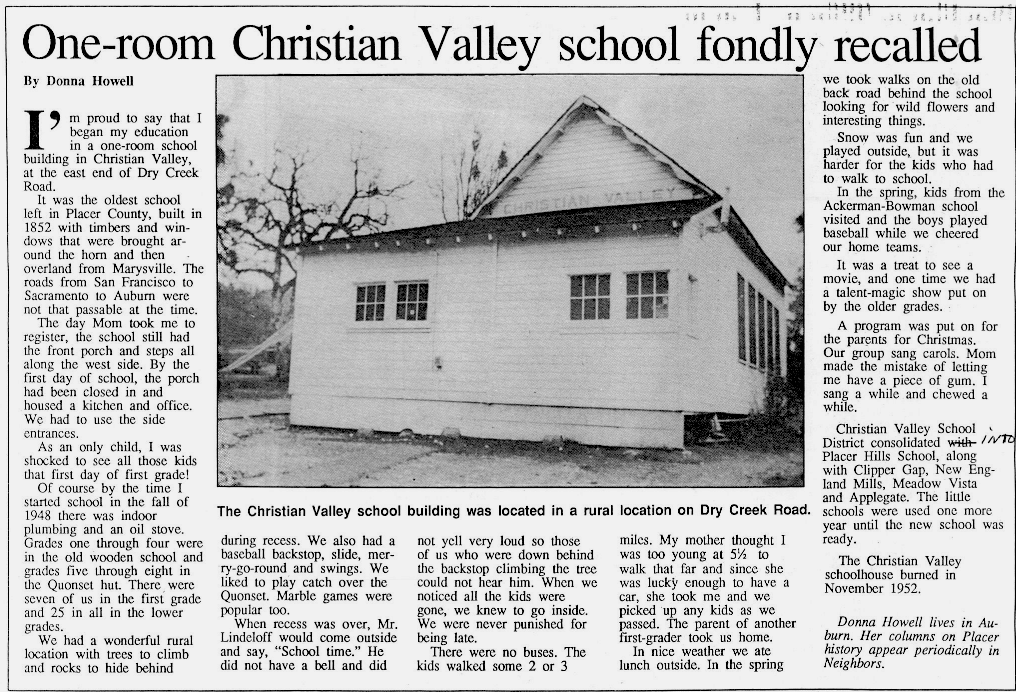 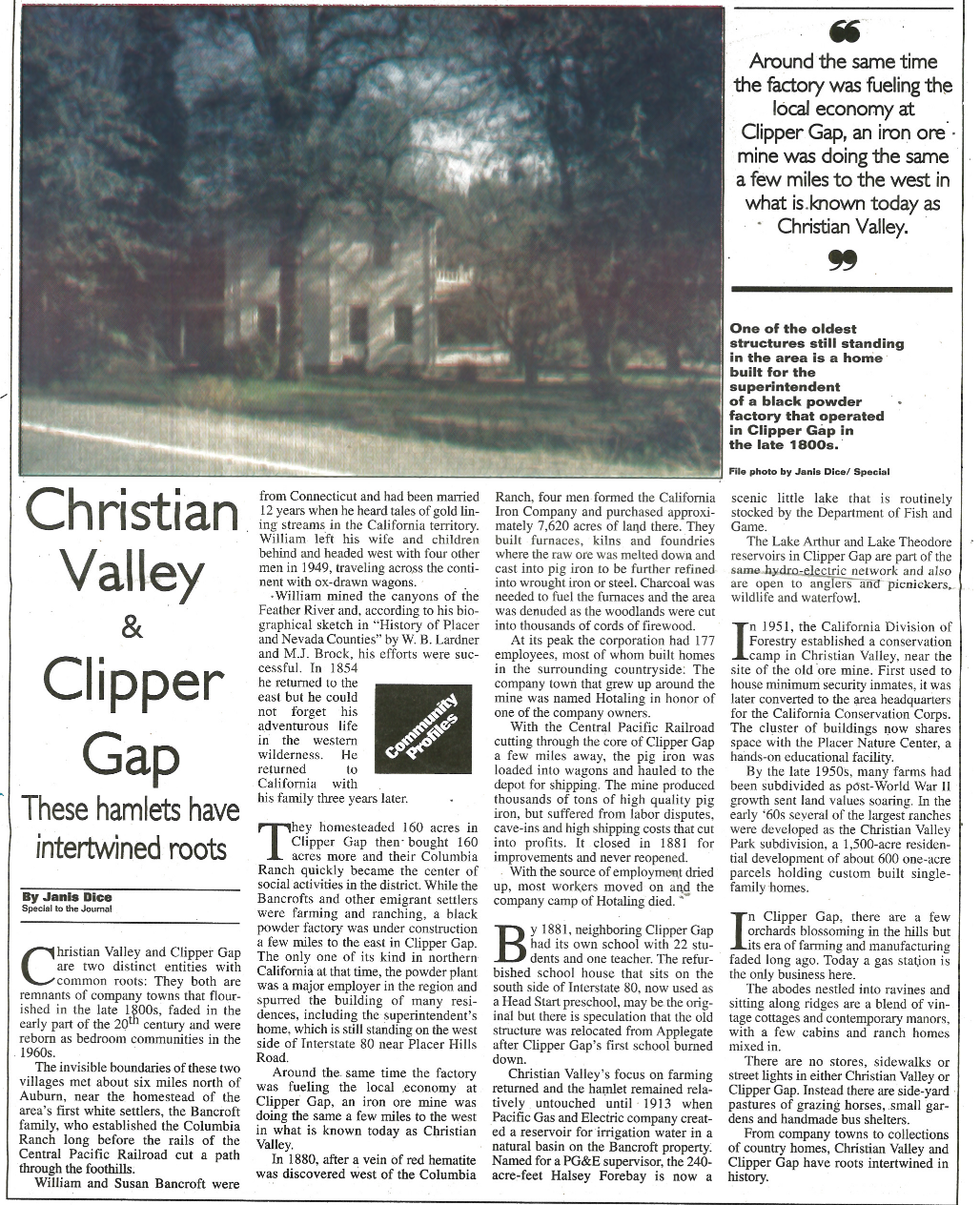 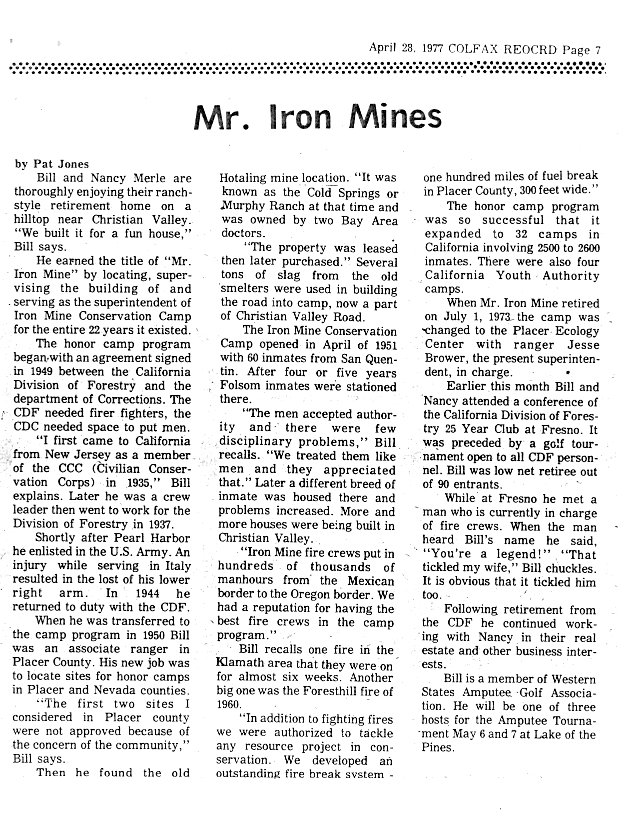 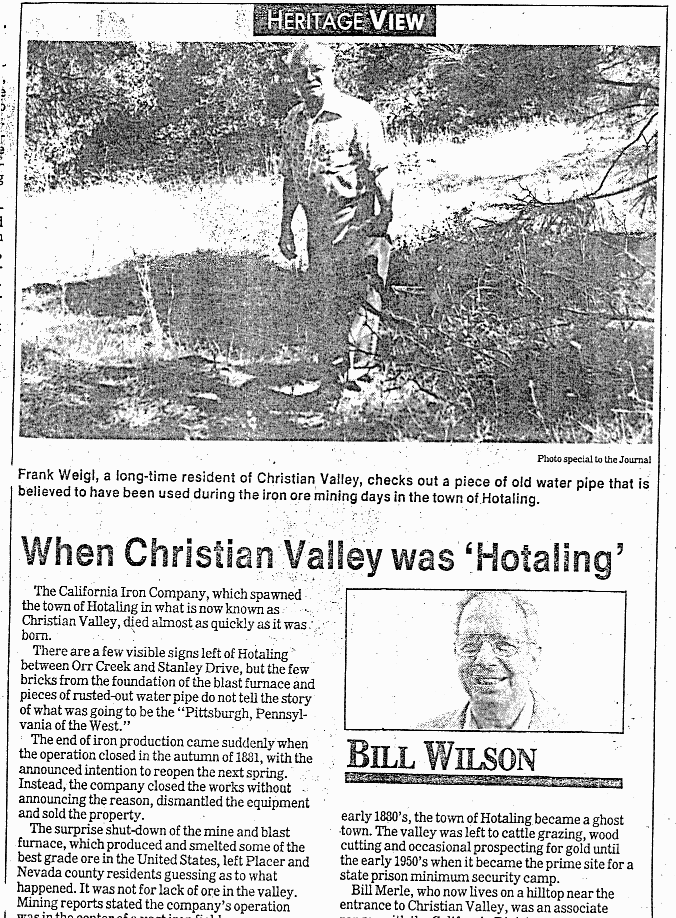 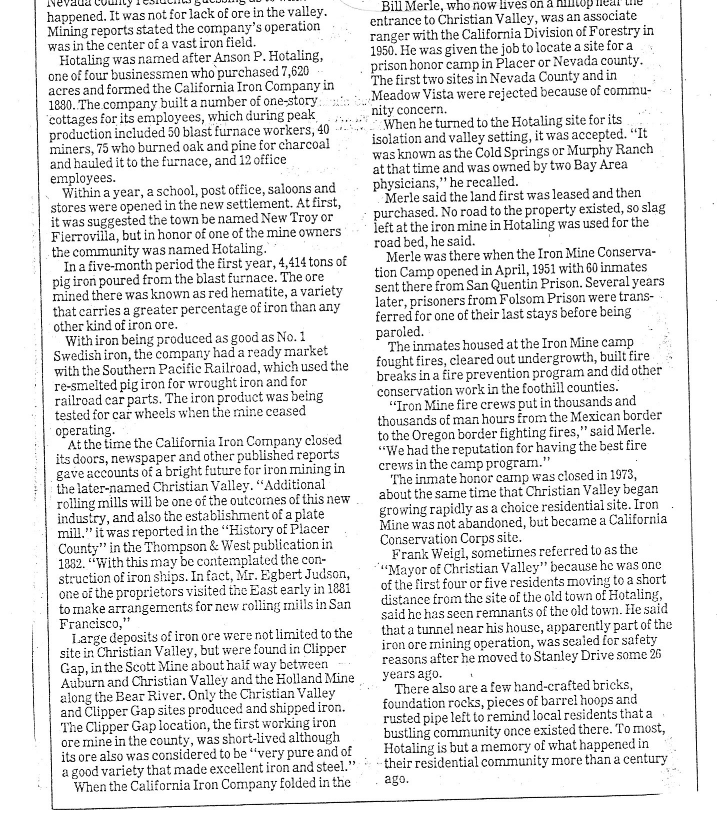 How Christian Valley Park Community Services District came to be....

Christian Valley Park Community Services District (CVPCSD) was officially recognized by the Placer County Board of Supervisors as a District, on October 23rd 1962.

The boundaries of the CVPCSD was fixed by resolution of the Board of Supervisors of Placer County on July 31st 1962.

The Districts founders and the only resident electors, were also the original land owners; split between (5) large parcels{Ranches}, that is referred to on the record as 'Units', and the park was eventually subdivided into a total of (9) Units.

The founders are: Frank and Dorthy Allen; Harvey D. and Robin P. Sterner; Tom F. and Adriana Rodgers; Francis V. and Mary R. Brown; and one couple that was not a landowner, but nonetheless, they played an important roll, and was pivotal and a significant partner, within the formation history of Christian Valley Park: William (Bill) and wife Gladys Merle as they were eligible to vote in the 1st election and helped form the District.:

Bill was instrumental in founding, forming and the construction of the U.S. Forestry facilities, which he would then be in charge of supervising the use of prisoners to use as the labor within the US Forestry jurisdictions, and also cooperatively within the California state lands, for wild-land fire suppression efforts.

Bill Merle managed the US Forestry Reserve for decades, overseeing 'IRON MINE CAMP.'

Bill Merle was in-charge of coordinating the Forestry personnel, transporting these prisoners to, and from, the then U.S. Forestry Camp, as work crews.

Many of these low risk prisoners were housed at what is now known to our CVP residents as the California Conservation Corps (CCC) Camp at: 3700 Christian Valley Road:

In the first election held on October 23rd, 1962, the district was formed and the first three Directors were elected. That fledgling board met for the first time on October 30th 1962.

The first elected Directors were: Frank Carr Allen; Francis Victor Brown and Harvey Denver Sterner. Each of the Directors received 10 out of 10 votes cast.

Under California Codes, the Christian Valley Park, CSD and the District was also formed under California's governing codes, for the following purposes:

A.) The collection, treatment or disposal of sewage waste and storm water of the district and its inhabitants.

B.) The collection or disposal of garbage or refuse matter.

G.) The equipment and maintenance of a police department or other police protection to protect and safeguard life and property.

H.) To acquire sites for, construct, and maintain library buildings, and to cooperate with other governmental agencies for library service.

I.) The opening, widening, extending, straightening and surfacing, in whole or part of any street in such district, and subject to the consent of the governing body of the county or city in which said improvement is to be made.

J.) The construction and improvement of bridges, culverts, curbs, gutters, drains and works incidental to the purposes specified in subdivision J, subject to the consent of the governing body of the county or city in which said improvement is to be made.

The Board of Directors of CVPCSD by Resolution No. 63-230 in the matter of CVPCSD Assessment District No.3.

The Directors' Requested Jurisdiction from the County of Placer, under the provisions of the Municipal Improvement Act of 1913, on August 10th 1963 the Directors of CVPCSD asked for jurisdiction for making improvements and to receive property tax revenues to support those improvements was approved by the Placer County Board of Supervisors on August 20th 1963. Another request was presented for expansion of the assessment district on September 14th 1963 and was also adopted by the County on September 17th 1963.

Currently CVPCSD has 627 water connections and jurisdiction over many other parcels that have ground wells, there is a integrative cooperative sewer line that runs down Christian Valley Road and continues down Stanley Drive, that is linked to Winchester Estates. But primarily most of CVPCSD's jurisdictional parcels are fitted with septic and leach fields for waste water and solids.

And although the District was formed and recorded as having the capabilities listed above: all subsequent Boards of Directors have remained as a governance that only oversees decisions specific to 'Potable Water' and 'Roads''.

But as you have read, the possibilities are only limited by our communities visions, convictions and commitments, and to participate and support more possibilities, for their futures, and their families legacy; that they wish to leave behind.

Christian Valley Park was form with 10 people who had a vision, and put everything on the line to bring it to fruition, a couple partners lost their shares, and they ultimately went bankrupt. But our tiny Special District still survived and with continued support, will live on in perpetuity, serving its residents.

Much like the Allen's, Brown's, Sterner's and Rodger's did back in 1962. By their example they show us, how It only takes a small association of like minded individuals, to form a village, and with knowledge and a firm foundation, that vision will survive, when there is proper stewardship, and when the community stands firm, working together collectively they can maintain that village.

The Author of this article:Diane-louise:Alessi: has 1st & 2nd hand knowledge: due to being domiciled in CVP since May 1966: submission made on September 14th, 2020.

Life is like riding a bicycle. To keep your balance, you must keep moving.
Albert Einstein

CVPCSD provides treated water service to 627 customers within the Districts jurisdictions. The District purchases raw water from the Placer County Water Agency (PCWA) and receives water from the Bowman canal system, to the water treatment plant; located on Westridge Road. Treatment consists of flocculation and sedimentation and filtration to remove dirt and other organic material from the water… 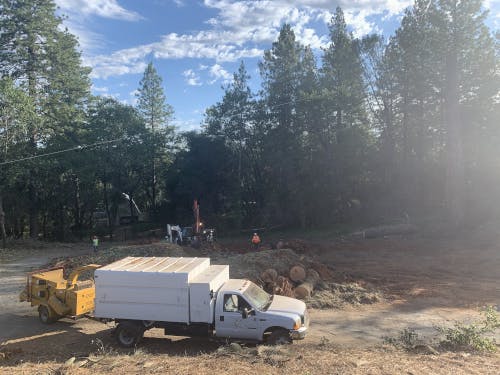 Sign up for updates from Christian Valley Park, CSD